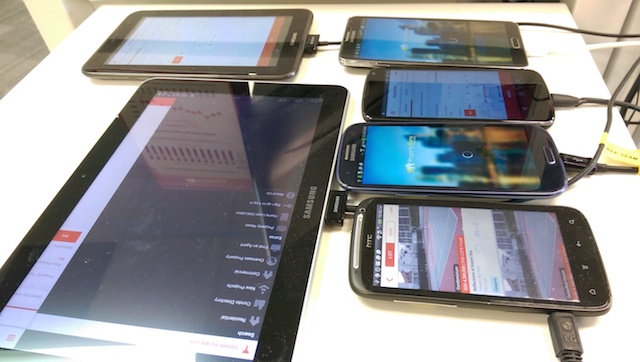 It is common for apps from the same vendor serving multiple markets to share the same UI logic with variants, or flavors. As the product grows, or more variants are introduced for new market, the time it takes to test all those variants increases propotionally with the number of variants. Even with the support of UI automation frameworks, such as Calabash Android, an original daily automation suite of 2 hours can quickly grow into a staggering 8-hour job for 4 product variants.

This blog post introduces an approach to drastically reduce automation time in such cases, by concurrently executing UI automation for different product variants via a Continuous Integration (CI) server. We choose to run UI automation tests on actual devices rather than emulators for several reasons:

Boost up development with a local sandbox server

When we are doing unit testing, more often than not we will probably stumble upon external dependencies that we wish we could just get them out of the way to focus on the testing task at hand. That is when mocking, stubbing, faking comes in handy.

If we apply these techniques in a broader context, says for app testing, where our external dependencies are web services, how do we consistently and reliably test our app against the ever changing data returned by real API calls? That is when we need a sandbox server.

The term sandbox is commonly used for the development of Web services to refer to a mirrored production environment for use by external developers. Typically, a third-party developer will develop and create an application that will use a web service from the sandbox, which is used to allow a third-party team to validate their code before migrating it to the production environment.

A better analytics tracking for your app

Google Analytics is great. I love it! People at my company love it! It tells you so many things about how your audience uses your app. But once your feet are deep into the analytics game, your application will probably end up with a bunch of clunky analytics tracking code as below:

Don’t get me wrong, the Google Analytics API is in no way bad, but the direct application of ‘analytics tracking’ may backfire you in the future, let’s say when you switch to another provider, or when you simply want to change the name of a category/action. This calls for a layer of abstraction to future proof your tracking methods.

Coincidentally (or not!), Google Tag Manager comes into the picture to help the abstraction of analytics tracking in a (not so) intuitive way. The idea behind Google Tag Manager is excellent, although it takes even an experienced engineer a while to logically put all its concepts in the correct place. That may explain why it does not get as popular as Google Analytics.

Test your external API like a boss with Cucumber

If it is your first time hearing about Cucumber or BDD in general, no sweat. In short, it allows you to specify your expectation in plain, readable text, meaning even your product managers can (almost) read and understand it!

However, what I like about Cucumber is less for this reason, but more for how scalable and maintainable it could be when your test suites grow over time, with features such as tagging and filtering, hooks, reusing steps, etc… I’ll let you find that out yourself, hopefully you will grow fond of writing your own BDD specs!

In the first part of this post, we have created a light theme and made initial preparation to support multiple themes. In this blog post, we will continue that effort, creating another theme and allowing dynamic switching of themes during runtime.